News
You are here: Home1 / News2 / Regional Programs3 / What Beyoncé Can Tell Us About Philanthropy 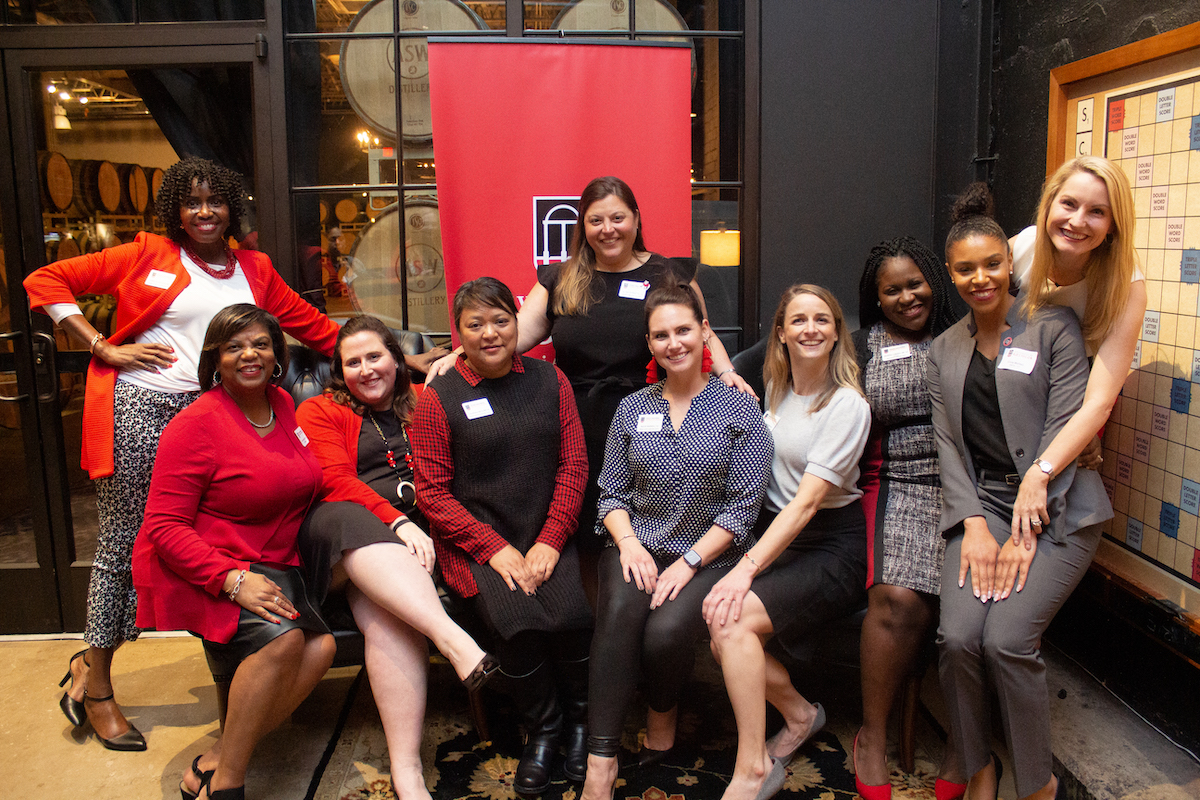 Photo: Members of Women of UGA at ASW Exchange in Atlanta on March 11

Over the past eight months, I’ve had the opportunity to be a part of a national coalition of fundraising professionals from over 40 universities aimed at sharing strategies around identifying, developing, increasing and stewarding a growing segment of major gift donors: women. Our guiding principles have centered around the book “Gender Matters: A Guide to Growing Women’s Philanthropy,” which is where the numbers and examples in this post originate.

Over the last decade or so, this community has not so silently become the fastest growing segment of wealthy individuals, making up over 40 percent of top wealth holders in the U.S. Not only are women making a statement in the workplace, they are also making a statement with their giving. So, how then, do we make sure we’re reflecting that in our own fundraising priorities and programming? While we’re making great strides in this space, a few long standing norms might still present unconscious barriers across our field.

Are our perceived industry best practices reserved for a shrinking donor base?

In the grand scheme of things, fundraising is still a relatively new field, dating back to the 1960s when the prototypical donor was a white, straight male and the dominant fundraising organizations were universities. Does the world look, feel and function like it did in the ‘60s? The answer is it depends. Today, there are over 1.5 million registered nonprofits, and degree-granting universities make up less than 1 percent of that equation. While universities and the traditional donor are still a dominant and long-established force in the business, they are also a shrinking majority.

While we’re all aware of the importance of diversifying our donor base and alumni leadership, this may be easier in theory than practice. It’s not that it’s not happening, it’s just harder to see in real time because it doesn’t look like what success—for us—has looked like before. That’s because the timeline may be longer, there may be more life interruptions and we as individuals might not even be in the same place in our careers when we can say “job well done.” This requires us to go against what we know, our own timeline and best practices, but best practices are just that: best, but not only practices. Our ability to adapt and intuit a little will eventually better reflect those donors and allow some of our yet-to-be-discovered female leaders to rise.

Women are more discerning, so the roadmap to success might look longer and involve more people 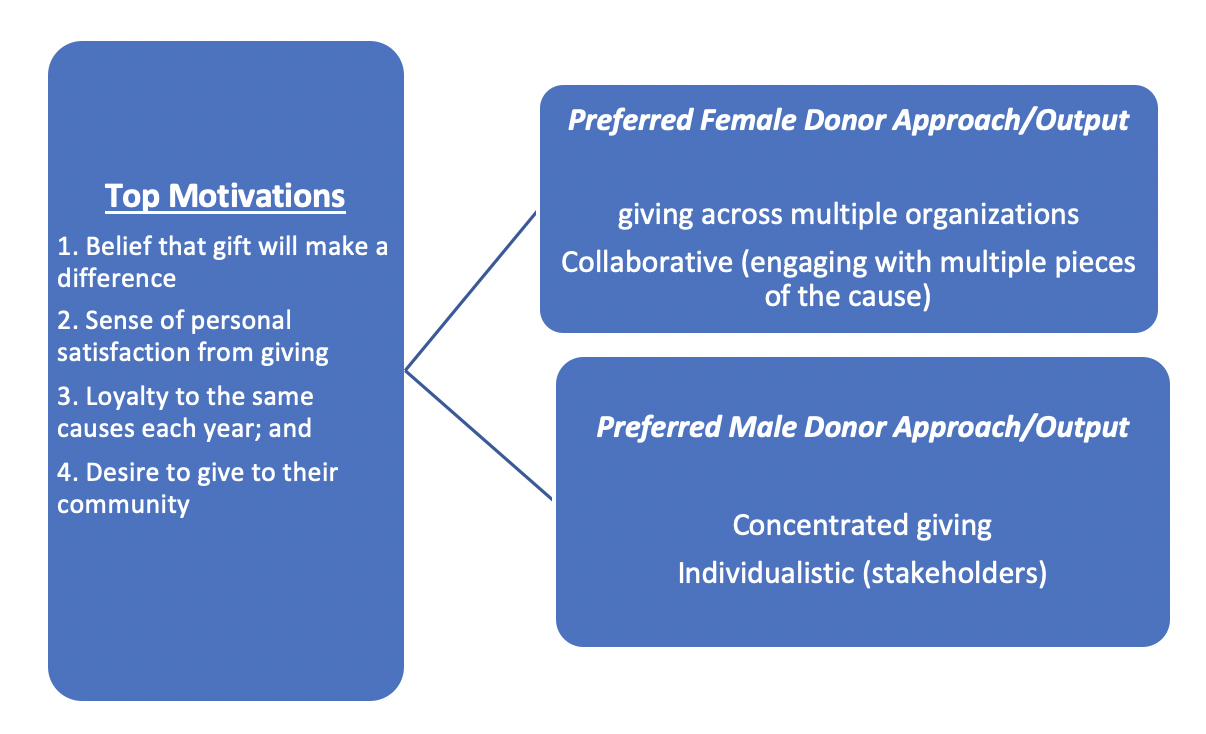 So, we know there are more nonprofits with worthwhile causes that compete with our own. However, that doesn’t mean it’s necessarily a zero-sum equation, where there can only be a winner and a loser. In the case of women, it’s quite the opposite. Women tend to spread their giving across multiple areas as opposed to concentrating it in one area. Women also tend to prefer a more collaborative approach: that is, working on many pieces to develop or strengthen the whole. As development professionals, we’re always challenged to be collaborative and nuanced in our approach, and while this is a widely adopted theory across the profession, it takes much more time and energy. So, if we’re applying traditional best practices equally across genders, we might see the output look something like the example below. 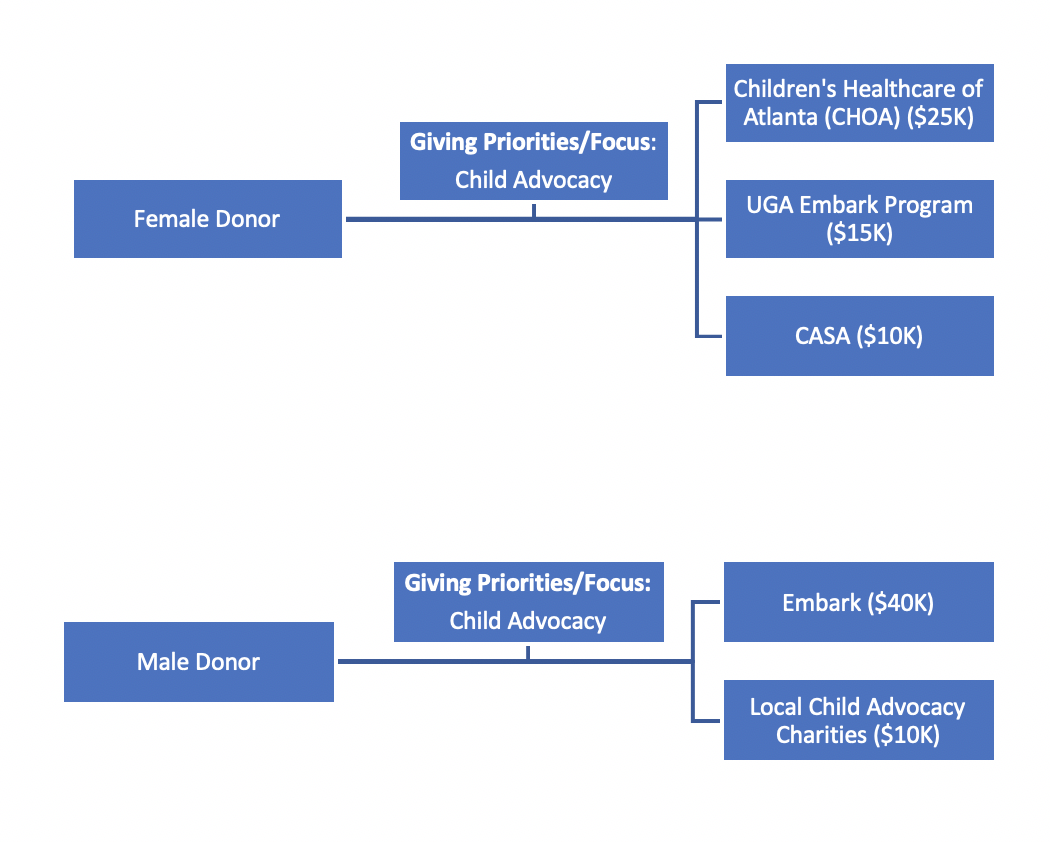 The example above tells the story of a $50K donation from a male vs. female peer and its potential distribution when we apply a traditional approach to engagement and cultivation. It’s no doubt a successful model, but the question for the female donor is, “How do we eventually convey the same or higher level of impact for Embark that a) they felt with CHOA or even b) their male counterpart experienced?” I think the first step is to apply what we know to be effective with female donors: a truly collaborative and immersive approach.

So, what does that all mean to me in the here and now?

Women see their impact in many areas and want to test the waters and see which investment has the biggest impact. Impact is financial, organizational and cultural. No more important is this than now, when women are collectively being asked to activate their resources, networks and treasure to help schools and universities in crisis as we look to manage our new reality in the age of COVID-19. 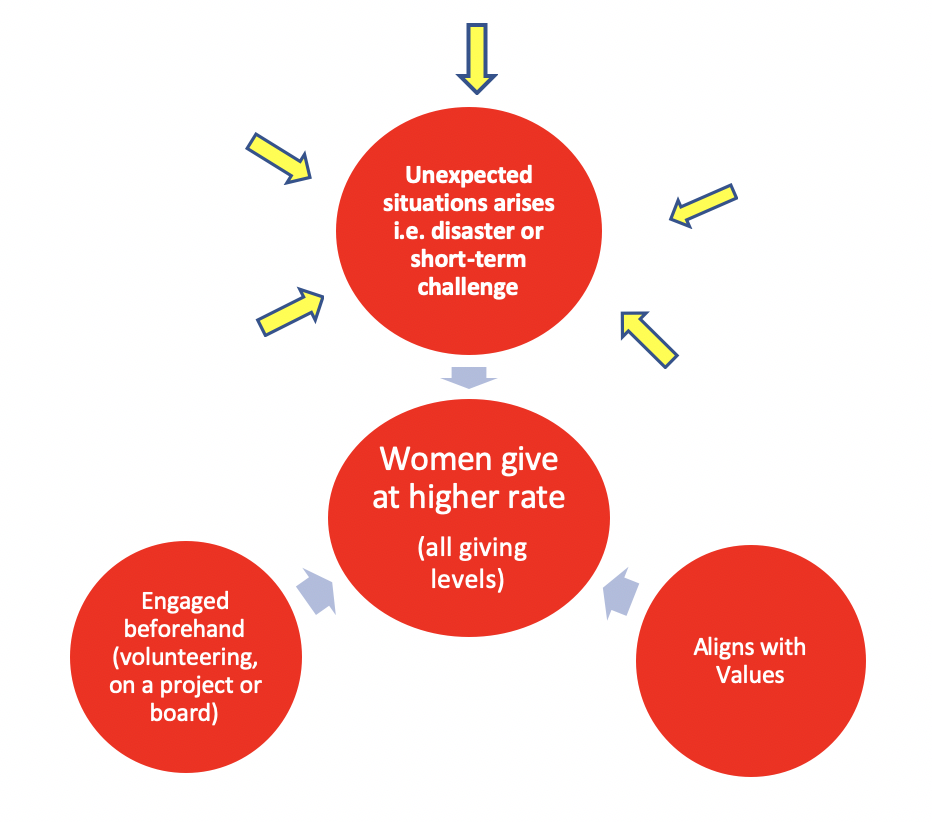 While women are more discerning when it comes to larger commitments, they tend to give at a higher rate when motivated by certain factors. Because they take a collaborative approach to giving, their previous engagements are strong factors that help us determine potential lifetime donors, leaders and advocates. Women might be the key to learning new best practices and adapting existing ones as the diversity of our donor base continues to evolve across all affinity groups. In the words of Beyoncé Knowles, “Who run the world… GIRLS!”

… Well, not yet, but we’re aggressively closing the gap!