In honor of the 50th anniversary of the Eta Xi Chapter of the Alpha Kappa Alpha Sorority, Inc., we are raising funds to establish… 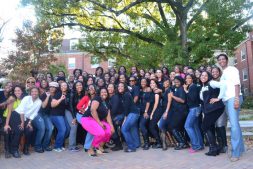 In honor of the 50th anniversary of the Eta Xi Chapter of the Alpha Kappa Alpha Sorority, Inc., we are raising funds to establish a Georgia Commitment…

In honor of the 50th anniversary of the Zeta Psi Chapter of the Delta Sigma Theta Sorority, Inc., we are raising funds to establish a Georgia Commitment Scholarship at the University of Georgia. This scholarship…

In July 2019, the University Theatre’s production of Peas, Pierre Pathelin, and Purgation, or Three Farcical Arts of the Deal is invited…

Theatre and Film Studies students at the University of Georgia spend many of their waking hours in classrooms, rehearsal studios, shops, labs, and…

For the first time in history, The University of Georgia is going to space – and it’s the students who are taking us there! These students will make history for the…

Concerned About Health Effects of Mercury? So Are We!

For over 100 years, the University of Georgia’s Redcoat Marching Band has served as the soundtrack to Fall Saturdays in Athens, and made a permanent mark on all who proudly marched and performed. To honor that tradition, and to…

On May 11, 2078, there will be a total eclipse of the sun over Athens, GA between 2:20 and 2:25 pm EDT. With over five minutes of complete darkness, which is almost double the longest time seen during the August…

Support iGEM’s research to genetically modify a solution that is economically efficient and cheaper in detecting toxins in Georgia’s largest export crop: the peanut.

Let’s March On: Support the Redcoat Band Teaching Tower About the Project Known for its appearances at University of Georgia football games, the Redcoat Marching Band was founded in…