The campaign has ended, but

you can still continue to show your support. Give now!

All contributions will be collected automatically until Apr 25, 2018, 7AM EST.

Decades have been spent trying to improve outcomes for dogs afflicted with aggressive brain tumors, to little avail. The same is true for human patients. Much work remains to be done. This UGA pilot study is extremely attractive to us as researchers. We are seeking funding for this project because of its potential implications across the veterinary and human worlds. It is the first attempt anywhere using a new image-guided platform, and this targeted therapy might be expanded later for use in other types of cancers, both in animals and man.  In a study completed by our group three years ago, we demonstrated that these chemotherapy microcylinder implants are well-tolerated in a lab setting. We have moved to a pilot clinical trial in which we are assessing the entire chemotherapy implant process for use in canine brain tumor patients. We have safely treated 6 dogs so far with this treatment and no adverse effects have been noted with potential benefits already identified. From there, we hope to launch a nationwide clinical trial testing this therapy across many institutions. Results of our work may favorably impact the standard of care in the treatment of brain tumors, perhaps sparing some patients from invasive brain surgery altogether. 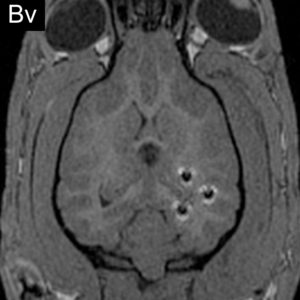 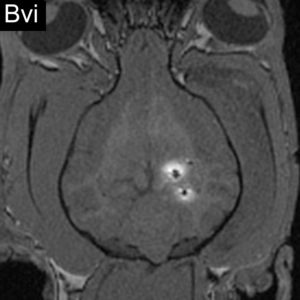 Medicated implants, seen on MRI as black dots after implant into a dog’s brain, release their payload over time (top panel); by Day 5,the medication has penetrated several millimeters away from each seed, as indicated by the white halo “footprint” coming from the tracer tag in every individual seed (bottom panel).

We are looking for donors who would like to support both pet and human cancer patients – our research would hopefully enter human trials following the success of the canine study. Brain cancer in dogs and people is very similar and supporting this project will support the future therapy of people with this devastating disease.

Brain tumors in dogs are very similar to those in man, typically just as devastating and difficult to treat. The standard of care in humans is surgery followed by chemotherapy and radiotherapy. In dogs, since experience with chemotherapy is quite limited, most treatments are limited to surgery and radiotherapy. In both people and animals, the blood-brain-barrier (BBB) is responsible for blocking 100% of large molecules and 98% of small molecules from entering the brain, thereby stopping most chemotherapy from attacking these tumors. A potential workaround is implanting chemotherapy directly into brain tumors using absorbable microcylinder carriers tagged with a contrast agent to make them visible on MRI imaging. This would bypass the BBB. We are exploring the feasibility of this type of approach. Once successful, we hope to expand this image-guided technique for the treatment of other solid tumors.

Brain tumors occur in dogs more often than they do in any other domestic species. Three percent of dogs may develop a brain tumor. Fortunately, the most common type of brain tumor is the meningioma, which is usually relatively benign and can be removed surgically. On the opposite end of the spectrum are glioblastomas. Sadly, very few victims of glioblastomas survive beyond one year. The mainstay of treatment of glioblastoma in dogs is surgery and radiotherapy. Chemotherapy, while commonly used in humans with glioblastomas, is seldom used in dogs. This disparity in treatment approach is due to the high cost of chemotherapy, inconvenience caused by the need for repeated intravenous chemotherapy dosing, a lack of data showing equivalent effectiveness in dogs, and the intense monitoring that is required due to the high incidence of serious side effects.

The absorbable microcylinder carrier material that we are using to overcome the BBB is made from PLGA, a plastic used in absorbable sutures. It can be blended to absorb over almost any desired time frame. It has been featured prominently in drug delivery publications over the years, and is biocompatible and non-toxic in the brain. However, PLGA tagged with a contrast agent has never been used as a platform for image-guided implantation.

Our group completed a safety study that showed that even the highest concentration of contrast was tolerated without lasting effects. More importantly, we proved that the combination of chemotherapy and contrast in a PLGA polymer carrier has the potential to serve as a minimally invasive vehicle for drug delivery. These exciting results have been submitted for publication in a peer-reviewed journal. 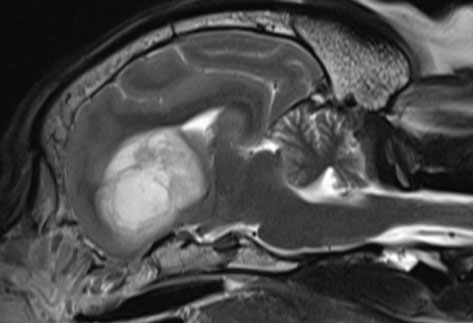 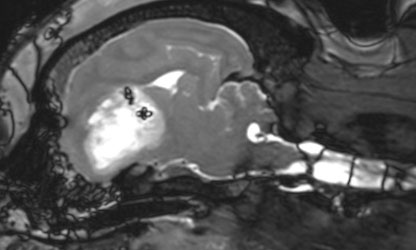 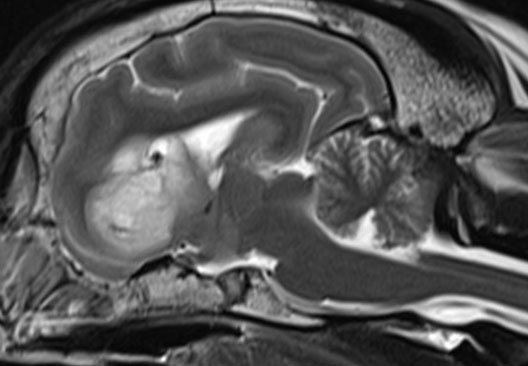 The research being conducted by our team is unique. To our knowledge, there is no comparable work being performed elsewhere. In our current pilot study, we are hoping to show that microcylinder brain implants can be completed accurately and safely in pet dogs with spontaneous brain tumors. Successful completion of this project may provide the basis for future work in other solid tumors. Our research aims to establish a new paradigm for the treatment of canine brain tumors that, by extension may, one day impact treatment in man.

Simon R. Platt, BVM&S, MRCVS, DACVIM (Neurology), DECVM (University of Edinburgh, Scotland, in 1992) is Professor of Neurology and Neurosurgery at UGA. Following two-years in private practice in England, Dr. Platt completed a residency in neurology and neurosurgery in 1998 at the University of Florida. After two years as an assistant professor of Neurology at the University of Georgia, he returned to the UK where he was Head of the Neurology/Neurosurgery Service at the Animal Health Trust. In 2006, Dr. Platt returned to UGA as an associate professor and then professor in the Dept. of Small Animal Medicine and Surgery. Dr. Platt has authored or co-authored more than 200 journal articles and 50 book chapters and is the co-editor of the BSAVA Manual of Canine and Feline Neurology, and the Manual of Small Animal Neurological Emergencies.

Elizabeth Howerth, DVM, PhD (DVM Michigan State University) is Professor of Anatomic Pathology at UGA. Amongst almost 200 publications to her credit are nearly two dozen focusing on pathology of the brain. This expertise proved invaluable during the analysis of brain sections taken during the safety study preceding the current trial.