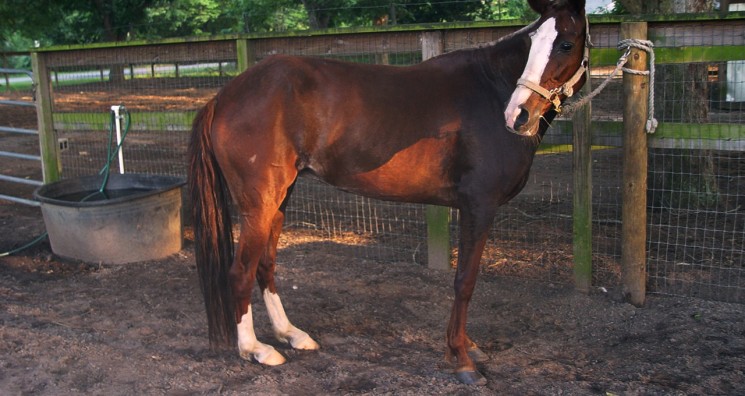 The campaign has ended, but

you can still continue to show your support. Give now!

All contributions will be collected automatically until Mar 5, 2015, 9AM EST.

For questions about the project, please contact Dr. Jaroslava Halper at jhalper@uga.edu.

A beautiful and sprightly Peruvian Paso limping in severe and chronic pain is a heart-wrenching sight. Until recently, little was known about a cause of this condition in this and other breeds, equine degenerative suspensory ligament desmitis (DSLD).  Our laboratory has discovered that, contrary to what had been thought, DSLD is not a disease confined to the suspensory ligaments but a disease that affects connective tissue throughout the horse’s body.  We have also found that it is associated with higher levels of a group of proteins known as “proteoglycans,” and that at least one of them has an abnormal structure.  At this point in our research, we are developing an accurate method for diagnosing DSLD by measuring the presence of specific proteoglycans.  Such a test could be useful in breed management, possibly allowing managers to prevent the disease from being passed on.  It will also allow us to test methods of preventing affected horses from experiencing the characteristic debilitating symptoms.  Our ultimate goal is to eradicate this disease and our discoveries have made us confident that this goal is within reach.

What is the significance of this project? 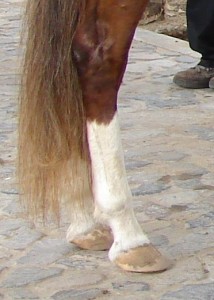 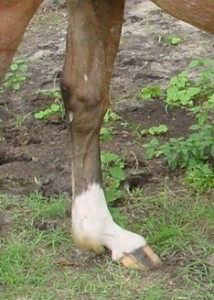 Lameness is often the first sign that a seemingly normal horse is affected with DSLD. On closer inspection, one notices that the fetlock on the affected leg has dropped. Sometimes an affected horse recovers temporarily, but the lameness returns with increased severity. The condition is so painful that many affected horses are euthanized. Until very recently, the only way to make a diagnosis was by the external signs. DSLD was thought to be a disease of collagen metabolism which was limited to the suspensory ligaments. Our laboratory has discovered that horses affected with DSLD have elevated levels of a group of proteins known as “proteoglycans.” Importantly, we also found that one of them, a proteoglycan called decorin, has an abnormal structure.   We suspect that other proteoglycans may be affected as well.  We also found evidence of the disease not just in the horse’s suspensory ligaments, but in most of the organs that have a high content of connective tissue (tendons and ligaments, blood vessels, including coronary arteries and aorta, and the sclera of the eye).

Connective tissue always contains proteoglycans, but in tissues from horses affected with DSLD, the levels were much higher and one of them had an altered structure. We believe that the condition may be caused by an inability to process these proteins.

At this point we do not have complete understanding of the exact pathogenesis of DSLD. However, our discoveries suggest a means to create a diagnostic test of DSLD. We hope to identify proteoglycans playing a role in the pathogenesis of the disease in horses with full-blown DSLD and also in horses that are at risk for the disease and, then, to monitor them to determine whether and when they show the external signs of DSLD. If we can show that certain proteoglycans serve as markers for the disease, we will explore ways of treating or preventing the disease by diminishing proteoglycan levels, or by modifying their metabolism. The first horses we studied were Peruvian Pasos, but later on we have found DSLD in other, more common breeds, such as Warmbloods and Quarter horses. It is possible that elevated or abnormal proteoglycans are the result of one or more gene defects. If so, then a method to diagnose DSLD before external signs appear might allow breeders to insure that the disease is not passed on.

Currently, three methods are used to diagnose DSLD: physical examination and palpation of suspensory ligaments, ultrasounds of suspensory ligaments, and nuchal ligament biopsies. When used together, these three methods are fairly reliable, but mild cases slip by. Too often, we need to wait for a necropsy and examination of multiple tissues of deceased horses. Our research aims to develop a diagnostic test for DSLD that could identify affected horses early enough to allow breeders to prevent them from passing it on to their offspring.

We will collect small samples of tissues from an adequate number of healthy and DSLD-affected horses. A special instrument called a Radioplast gun will be used to remove small pieces of tissues with minimal damage and discomfort to horses.  The tissues will have to be fixed in formalin and embedded in paraffin; thin sections will be cut, placed on glass slides, and used for identification of markers. We will need to buy special chemicals and supplies which will enable us to identify individual markers in tissue.  Examples of such supplies are antibodies and RNA probes against a panel of proteoglycans and related molecules, and for kits detecting protein antigens and nucleic acids, respectively, present in tissues.

We have found that DSLD is a systemic disease characterized by the accumulation of proteoglycans and the presence of at least one abnormal proteoglycan, so called decorin. Proteoglycans regulate the assembly and the composition of connective tissues. Thus far, we have been analyzing tissues obtained by biopsy from the nuchal (neck) ligament to determine the level of proteoglycans as a guide to diagnosing DSLD. This method is helpful, but it needs to be refined to increase accuracy and reliability. In this project, our goal is to find one or more chemical compounds that are present in horses afflicted with DSLD, and not present in the tissue of horses that are not afflicted with the disease.  Such compounds “mark” the presence of DSLD.   We hypothesize that this marker or these markers are proteoglycans or related proteins.  However, it may be that what marks DSLD is not a unique or abnormal type of proteoglycan but merely increased levels of a proteoglycan that is normally present.  In this case, we would need to look toward measuring levels of proteoglycans in tissue extracts.  We have the technical expertise to undertake this sort of investigation, but it would require more resources than the present project calls for.

The new marker should be easily identifiable in tissues obtained from a biopsy of the nuchal ligament or affected tendon. We will test several markers, such as individual proteoglycans, and enzymes involved in their degradation.  We have been doing and evaluating biopsies of nuchal ligament for several years for the presence of proteoglycans.  Because we would like to correlate better clinical findings with a biopsy, we need to develop a safe and reliable biopsy of a leg tendon as well.  In order to get samples for testing, we will use first leg flexor tendons and suspensory ligaments from cadaver horses to develop a biopsy method of a tendon without damaging it. We will assess the biopsy’s safety and healing by clinic trials in standing, sedated horses. Then, we will compare the nuchal ligament biopsy samples to tendon biopsy samples in terms of healing, discomfort, sensitivity, and specificity in 5 healthy and 5 DSLD-affected horses.

Once we have an acceptable biopsy method, we will examine the differences in the tissue staining for particular proteoglycans and enzymes involved in their metabolism between normal and DSLD affected tissues, and between samples from nuchal ligaments and flexor tendons. The identification of markers will aid in the development of a detection test that could be used before the horse manifests any clinical symptoms. The development of such test will, we hope, allow breeders to eliminate DSLD disease from their herds.

Background: Dr. Halper had been working on tendon problems in chickens for some time when a passionate owner of Peruvian Pasos came into her office to tell her about a progressive and debilitating lameness problem that was affecting his horses. What concerned her immediately was the degree of suffering affected horses experienced. Her initial idea was to apply some of what she had learned from chickens to horses. That was why she started looking closely at proteoglycan levels. As this approach began to meet with success, she started devoting more attention to DSLD so that, at present, she is spending much of her time investigating this devastating disease.

P.O. Eric Mueller (DVM, Michigan State University; PhD, The University of Georgia) is a Professor of Large Animal Medicine at the UGA College of Veterinary Medicine.  A board certified equine surgeon and an indispensable collaborator, he has joined this endeavor right at its beginning. He diagnoses DSLD through history, physical and ultrasound examinations.  He developed the technique of biopsy of the nuchal ligament and is presently refining actual tendon biopsy technique.

Charlie Buchanan joined us recently in our efforts to improve our diagnostic acumen. He is an equine veterinarian in Texas, and he became intrigued with DSLD (which he started seeing in some horses, esp., Quarter Horses), and with the technique of nuchal ligament biopsy.  He refined the biopsy method so as to use a needle to remove a small piece of nuchal tissue.  This method is easier on the horse but provides less tissue so it will be useful in later stages when we will have pinpointed a specific marker.

Read more about the research, DSLD, and proteoglycans in the team’s published papers.

Our goal is to find at least one biochemical compound that appears in horses affected with DSLD and that it would signify the presence of the disorder.  We believe that there is one or more proteoglycan that can be identified in tissues removed by biopsy from a horse’s neck or leg that we will be able to use as a sign of DSLD.  Toward this goal we will first look for the most efficient and least painful way to biopsy either the nuchal ligament or  leg tendons. We will compare biopsy samples obtained from different places from dead horses and, eventually, from live horses. We are looking for at least one compound that will serve as a reliable indicator of the presence of the disease, and we have good reason to think that we will find it. At that point, we will have the basis for a test that can be used widely to identify horses affected with DSLD before they manifest any clinic symptoms. Such a test could, in principle, allow breeders to eliminate DSLD from their herds. In addition our results will enable us to measure levels of various proteoglycans in the extracted tissue and to study the role of individual proteoglycans (and related proteins) in the pathogenesis in DSLD in the future.